Two Yew trees in Dalzell Estate, Motherwell measure up to be the tallest in Europe

The Scottish Branch of the Arb. Association organised a peripatetic tour of The Dalzell Estate in Motherwell, North Lanarkshire hosted by Maxine Ross in November 2021.

Maxine introduced the group to the Covenanter's Oak (Quercus Robur) which is said to have been planted 800 years ago by King David I as part of a deer park and hunting estate making it a contemporary of the Oaks over the River Clyde at Cadzow.

The conversation then turned to the historical context of the significant and numerous Yew trees on site.

The history of Yew being used for longbows

After Bowyers in Scandinavia discovered the composite benefits of Yew sapwood and heartwood around 300 A.D. the technology of Longbows progressively developed to give Archers point blank armour piercing power and a range of up to 300m.

Over the next 100 years the Yew longbow played a key role in the forging of a world order which eventually gave rise to the British Empire.

Demand for Yew staves led to the depletion of native British stock and the subsequent import of a slower growing and therefore superior continental supply from Italy, Spain and Albania. The extensive stand of Yew trees planted at Dalzell Estate seemingly matured into obsolescence with the decree by Elizabeth I in 1595 that the army was to replace its longbows with shotfuns despite the relative inferiority of firearms at the time.

This is only conjecture since it is not known exactly when they were planted or for what reason. Maxine, who has studied Yew trees specifically, went on to offer an intuitively compelling theory that Irish Yew is a mutation resulting from fire damaged Yew trees.

A more light-hearted discussion on the entheogenic properties of Yew pollen and its potential link to religious mythology followed. Could this be the reason why in some languages the root meaning of the word for a Yew tree is "the Tree of God"?

During the walk we encountered two especially impressive Yew trees planted togehter on a riverbank at the foot of a bowl-like geological depression. The observation of these trees within this unique location gave rise to a spontaneous discussion within the group about their relatively tall appearance. This led to Mark Foster of the Arb Association volunteering to return to measure their height. Maxine explained to the group that the trees were named after the twins Jacob and Esau from the book of Genesis. Esau was the girthier and apparently taller of the two trees and would receive our focus when we revisited to measure its height a few months later. 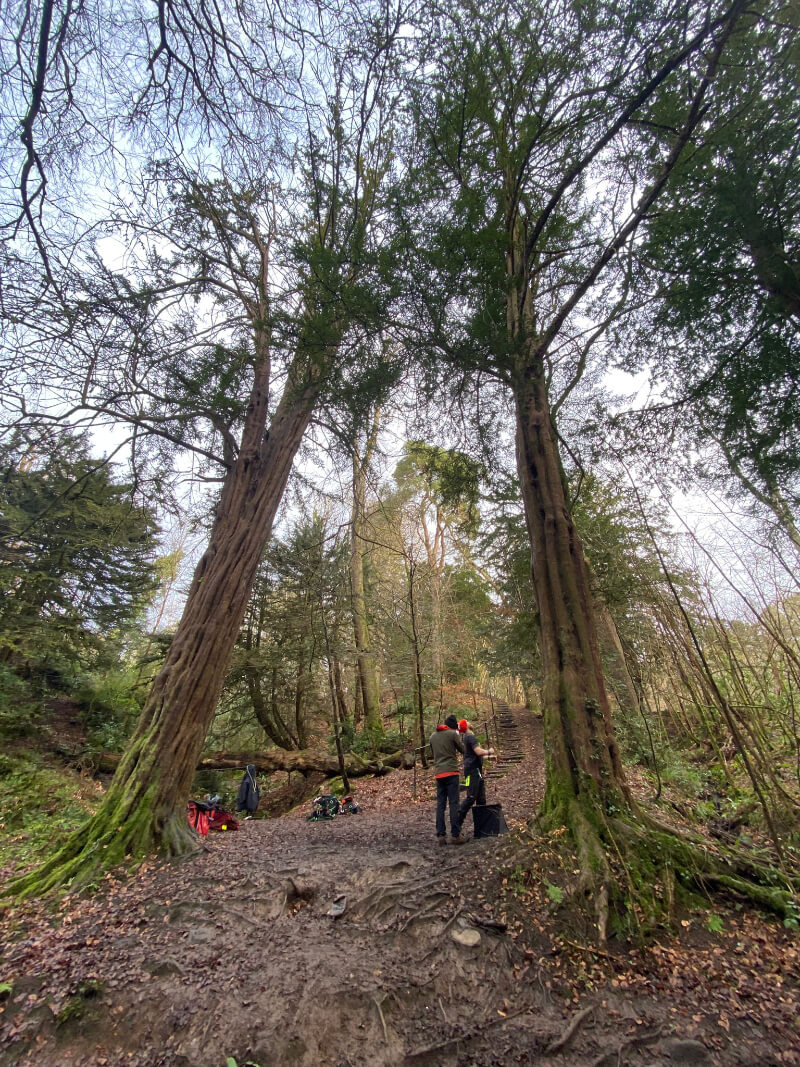 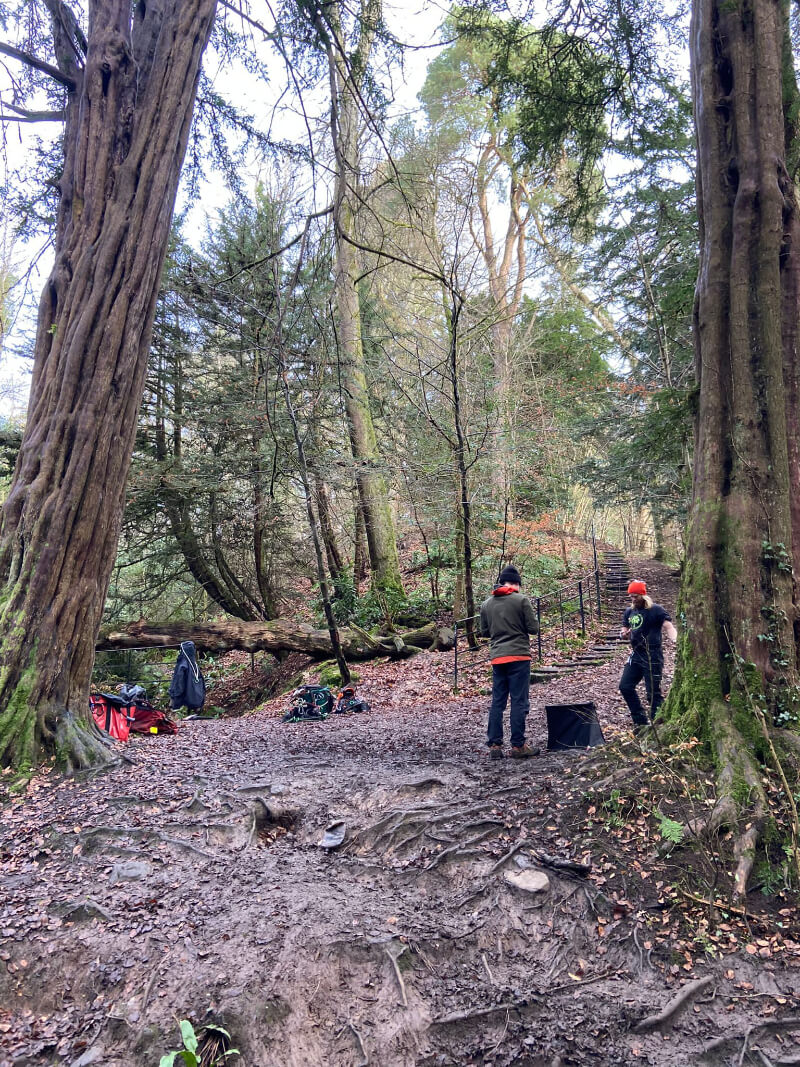 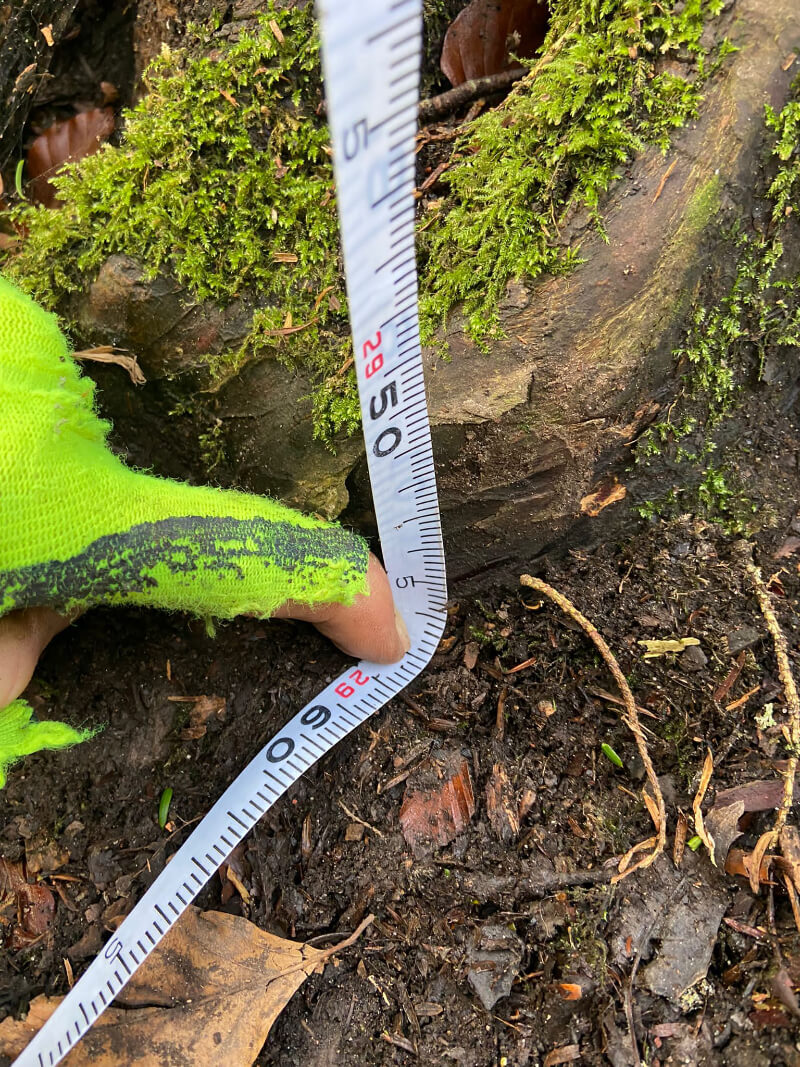 The tallest Yew tree in Britain?

Mark and I attended the location in late January with the young apprentice Arborist Douglas Crawford who I had encouraged to come along for the experience; I explained to him that time spent with trees where there are no cutting tools present is a healthy and necessary way to reconnect with your original motivating love of nature.

Upon arriving on site the nurturing sound of the river accompanied by a wee bird flying out in full song signified a hope for the forthcoming Spring time beyond what had seeemd like a long dark winter break. Mark climbed Esau and I passed up the measuring instruments while Douglas suggested that he climb Jacob just for the practice.

As I tightened the tape at the base of the tree, I was surprised to find that it was going to be close to 30m. That seemed extremely tall for a Yew tree. Not expecting thais we hadn't carried out any research into the tallest Yew tree in Britain prior to the visit. After consulting Google we found  that the current record was held by a Yew tree in the garden of Belvoir Castle in Leicestershire which measured 28.4m in 1987. As I read this out loud to the two climbers I discovered it was also the tallest in Europe.

Suddenly our task took on some serious significance; Esau could be the tallest in Europe. A fitting status for the first born twin.

We checked and double-checked the result as the tape read 29.5m, over 1m taller!

Could the apprentice's Yew tree be taller still?

Just as in the Biblical tale, Douglas's Yew tree Jacob had grasped the heel and stolen the statues of his brother brother Esau measuring in at 29.8m.

It was an unexpectedly rewarding experience for all three Arborists and a particularly significant boost for the young apprentice.

Special thanks to Maxine for the introduction.

GET A
FREE QUOTE